The Value of Ignorance

The purpose of this blog post is to provide different perspectives of ignorance.  Mere stupidity can be associated with Ignorance, yet a Milan Kundera novel holding that word as a title stipulates an opposite aura.

Although originally written in French, Kundera’s novel was first published in Spain – in Spanish and Catalan.  A quote from the book:  “añoranza say the Spaniards…which comes from the Catalan enyorar, itself derived from the Latin word ignorare (to be unaware of, not know, not experience; to lack or miss)… You are far away, and I don’t know what has become of you.“

Do you think there’s a weird amnesia that people have built in for self-protection?

Although I lived a short while in Japan when I was a little girl, I had no recollection of that time period; and therefore, felt like a casual acquaintance to the country.

“Being in a foreign country means walking a tightrope high above the ground without the net afforded a person by the country where he has his family, colleagues, and friends, and where he can easily say what he has to say in a language he has known from childhood.” – Unbearable Lightness of Being by Milan Kundera.

My February visit was marked by delicious food, awe, and kindness.  Luckily, I still remember a bit of Japanese and my experience of Japanese politeness was not limited to just navigating the area.  Friendly small talk was offered to me by:  Cooks in “mom and pop” ramen eateries, neighboring businessmen also slurping noodles, tourist information workers, a Portuguese student working as a waitress in a prison-themed restaurant, and even these little girls in their adorable school uniforms who greeted me with “douzou” in offering their seat when I stepped onto a full train car.

Yet, the quintessential Japanese bow delivers non-verbal courtesy.  I found it interesting whenever I saw a shinkansen controller face and bow to patrons before he left through the doors in order to walk through the next segment.

Gentleness was conveyed through my email contact with Kaori who owns two family-run kimono shops in Tokyo.  Granted it is possible to dress kimono in Kyoto, I felt I would rather spend time exploring its temples.  Moreover, paying a visit to Omiya was planned in order to do view Bonsai trees; and so, Kahori Ochi Sakayea Kimono Shop was chosen.  Arriving after a 10 minute walk from Omiya station, I automatically felt welcomed by the warm composure of Kaori’s mother.  In fact, if it had not been for her pleasant nature, I would have thought she was angry at me with all the tugging and tightening she was doing with the different layers of fabric.  After 30-40 minutes of dressing, I sneezed and really felt the snug bounds of the kimono.  When it was time for my walk in the Hikawa Jinja temple, she asked for my passport.  I thought it was for insurance that I would come back to the shop with the kimono, but she placed it in a purse matching my kimono.  Apparently, she was reminding me to keep my passport with me.

One of the oldest Shinto shrines of Japan, Hikawa Jinja, is a short distance away from the Kahori Ochi Sakayea Kimono Shop, yet being constrained by zori slippers and a narrow kimono made the journey slower.  Within the Omiya park, its Japanese garden, and the Hikawa Jinja temple grounds it is possible to take photos in your kimono such as this:

Returning to the Kahori Ochi Sakayea Kimono Shop, I had further difficulty kneeling and getting up with my kimono during the tea ceremony.  Nevertheless, I was a bit sad to remove the kimono and go back to my simple self.

3.  Ignorance can help you quell all your problems for a moment.

Travel opinions agree that Japan is a mix of contrasts:  busy and calm, fast and slow, noisy and quiet, past and future.  In my opinion, Harajuku is a prime example of such contrasts.

“She succumbs to the charm of these affinities, these furtive contacts between present and past; she seeks out these echoes, these co-respondences, these co-resonances that make her feel the distance between what was and what is, the temporal dimension of her life.” – Ignorance by Milan Kundera.

Although choices for home base while visiting Tokyo are numerous in regards to district or accommodation type, we decided to rent a holiday apartment located outside the main part of the city..  A blend of modern and traditional style (e.g. sleeping on the floor  with futons and shoji doors), I was first impressed when I saw a this sign, because I am a big fan of Ghibli. 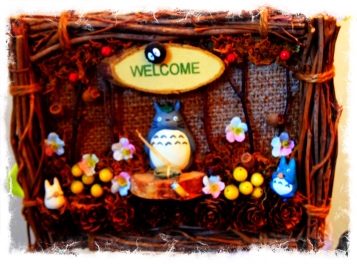 And the view of Tokyo Sky Tree when we step out of the door was an added bonus.

I probably look like this tree spirit (an adorable character in my favorite Ghibli movie “Princess Mononoke”) when I am walking among the labyrinth created by the high rises.

So to try to get a sense of the megapolis from high above, go to the 45th floor of the Tokyo Metropolitan government building for a free viewing.

In Tokyo, there are opportunities to become ignorant of the “busy-ness” side of life and achieve tranquility.  The Ueno and Asakusa areas have temples at almost every turn of the corner.  The Shitaya Shrine has a special place in my travel story.  For the first two days of the trip, the weather was cloudy.   But I kid you not that as soon as we finished going through the “omairi” at this shrine, the sun came out and only rested when it was the moon’s turn.

Shitaya Shrine:  Here deities for business prosperity  and happiness in marriage are enshrined.

For more chances to ignore the pace of Tokyo, why not go to visit the Omiya Bonsai Village that is a 5-minute walk from Omiya Koen Station on the Tobu Noda Line?

I’m never ready for the camera 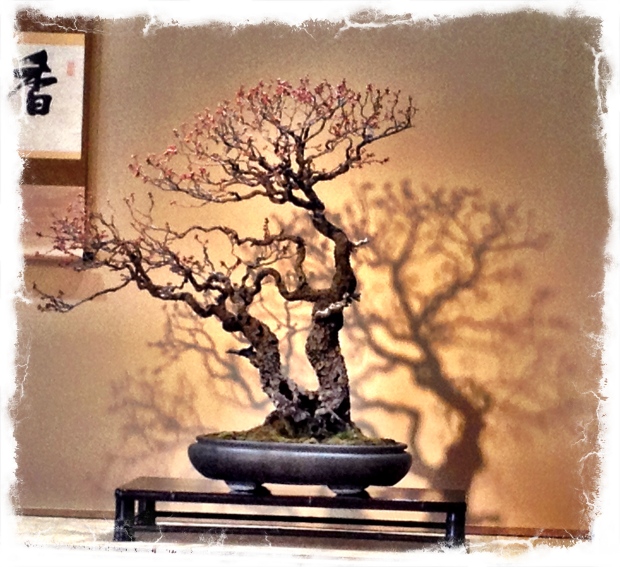 At one point, it became so silent, if not for the occasional breeze blowing through the trees.  George Prochnik wrote in his book In Pursuit of Silence: Listening for Meaning in a World of Noise:  “Sound imposes a narrative on you and it’s always someone else’s narrative. My experience of silence was like being awake inside a dream I could direct.”  Moments such as those are times just to take a breath (“qi”).  To let go and connect with oneself.

“Every person has a pile of garbage in their belly because it is the only place the body has in which to repress emotions…These repressed feelings prevent you from breathing properly…Once you take a deep breath, the wounds from those repressed emotions release their energy…When too many repressed feelings enter the belly, the body splits in two, into upper and lower halves.  In that event, you are no longer a single entity and lose that sense of wholeness.”  — Indian spiritual leader Osho.

Yes, ignorance can be bliss.

My favorite magazine, “The Atlantic” writes:

The only thing worse than ignorance is indifference.

My current read:  A book of Rumi’s poems found in a secondhand bookstore in Salamanca, España

Along with this, my next post discussion:  Last week’s short 4 day holiday in Portugal. 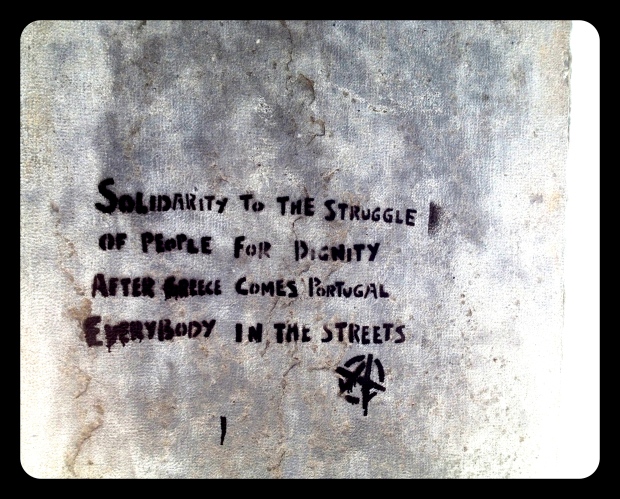 ← Tell me I’m beautiful
The insanity of love →

34 thoughts on “The Value of Ignorance”